NEW ORLEANS— In nearly one-third of patients with Waldenstrom’s Macroglobulinemia, a specific genetic mutation switches on the disease, and a new drug that blocks the defective gene can arrest the disease in animal models, researchers at Dana-Farber Cancer Institute and allied institutions will report at the 2013 annual meeting of the American Society of Hematology (ASH). The finding may open the way to clinical trials of the drug in Waldenstrom’s patients whose tumor cells carry the mutation.

Waldenstrom’s is a form of non-Hodgkin lymphoma diagnosed in 2,000 to 3,000 people in the United States each year. In 2011, researchers led by Steven Treon, MD, PhD, director of the Bing Center for Waldenstrom Research at Dana-Farber, and Zachary Hunter, showed that tumor cells in 90 percent of Waldenstrom’s patients carry a specific gene mutation – the first time the disease had been traced to a particular genetic flaw. More recently, Treon reported 29 percent of a small group of Waldenstrom’s patients had mutations in the gene CXCR4.

In a study to be presented at the ASH meeting, Irene Ghobrial, MD, director of the Michele & Stephen Kirsch Laboratory at Dana-Farber, and Aldo Roccaro, MD, PhD, also of Dana-Farber, and their colleagues examined samples of Waldenstrom’s tumor cells from a far larger group of patients – 250 in all – and found that CXCR4 was indeed mutated in about 30 percent of them.

In experiments with laboratory cell samples, the researchers found that Waldenstrom’s tumor cells with the CXCR4 mutation proliferated more quickly than those without the mutation.

In mice, Waldenstrom’s cells spread further and faster if they carried the CXCR4 mutation than if they did not, metastasizing to the animals’ liver, bone marrow, lymph nodes, kidney, and lungs. When researchers re-examined Waldenstrom’s cells from human patients, they found that cells from patients with the most aggressive disease were the most likely to have CXCR4 mutations. 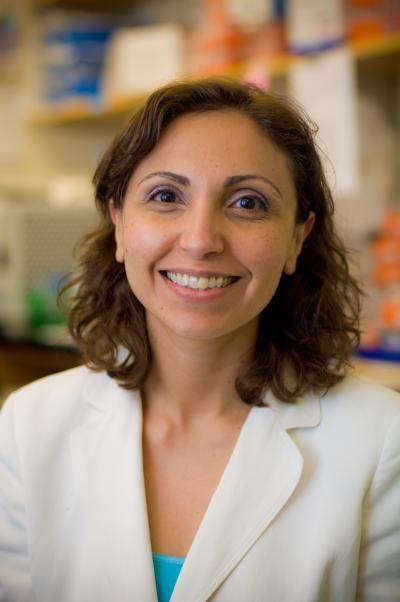 Dr. Irene Ghobrial led a study showing a drug that targets the driver mutation in patients with Waldenstrom’s Macrogloblinemia is proving effective in animal studies.

“These findings led us to hypothesize that the CXCR4 mutation drives the disease – that it spurs Waldenstrom’s cells to grow, divide, and metastasize,” Ghobrial said. When researchers treated Waldenstrom’s-carrying mice with an antibody that targets the mutation, progression of the disease halted.

“We have now identified a specific mutation that drives this rare disease, as well as a potential drug capable of acting against it,” Ghobrial remarked. “We hope this work can be a springboard to clinical trials of drugs for patients with Waldenstrom’s.”

The findings are especially important in light of another study presented at the ASH conference. In it, researchers led by Treon and Maria Lia Palomba, MD, of Memorial Sloan-Kettering Cancer Center, tested ibrutinib – a drug that blocks growth signals in Waldenstrom’s cells – in 63 Waldenstrom’s patients who had received at least one prior treatment.

When researchers examined the bone marrow of 34 patients who had taken ibrutinib for six months, they found that the amount of marrow impacted by Waldenstrom’s had declined between 45 and 70 percent. Patients whose Waldenstrom’s cells harbored the CXCR4 mutation, however, did not respond as well to the drug, suggesting that they could particularly benefit from an agent that targets that specific mutation.

“The results show that ibrutinib is very active and well tolerated in patients with relapsed or hard-to-treat Waldenstrom’s,” Treon remarked. “The discovery of CXCR4 mutations in Waldenstrom’s is an important milestone, and provides a means to identify which patients are more likely to benefit from ibrutinib. Our findings also provide a framework for studying combinations of ibrutinib with CXCR4 inhibitors.”